My Nephew, Nyall Galloway, turns 18 today. As he marks this major milestone there's another birthday on my mind. Today, also marks the 100th Birthday of my Grandfather, Neil.

So tonight, with fond memories and great respect, I'll raise a glass to this great man.

Here's to you Gag.

Posted by Unknown at 6:32 pm No comments:

20 years on; Keep me in your hearts, I'll stay there forever.

Born on the 10th of May, 1916, will see this year, mark Neil's 100th Birthday. In this same year, on Tuesday 9th February, my partner Ilze, gave birth to our first Child. A beautiful baby girl, we named Amelia.
Looking at pictures of a cartoon character on her nursery wall. I was reminded of a simple quote from the famous bear himself that reminded me of my Grandfather; 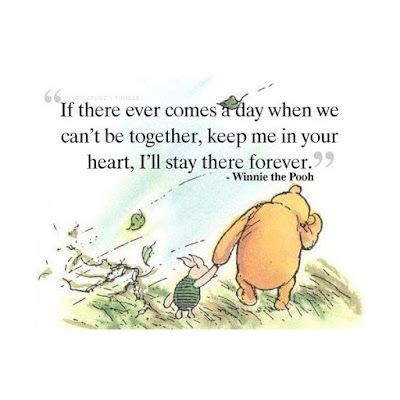 As the service approaches two weeks today, I have been looking through some of the written memories within my Grandfathers Story, about his friend "Tony" as he called him.

Having been approved by "The Escape Committee" within the Camp, Neil was informed of the person who would be accompanying him on their attempt for freedom.

Speaking perfect German, proved to be a great advantage for the two men, on their first encounter with a Guard at the gates of the POW Camp; 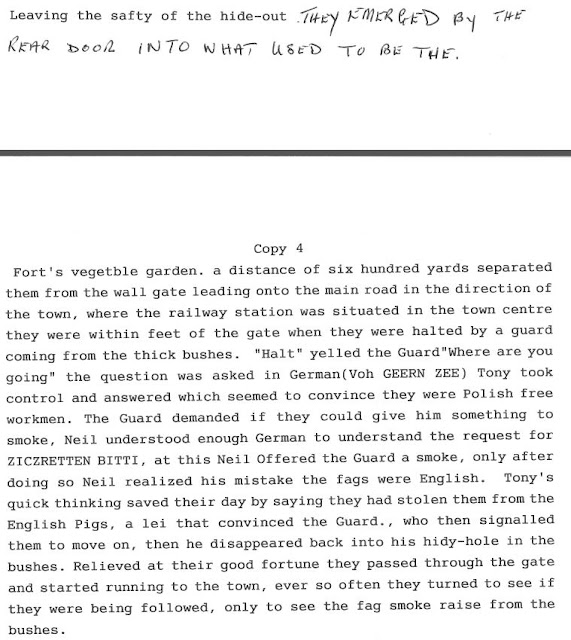 Having been captured at the port of Gdansk the two men were eventually returned to the POW Camp. Later they would become part of a notorious and well documented "Escape Committee". 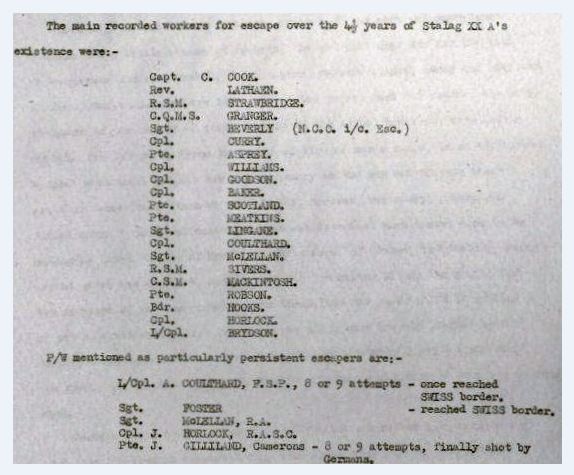 Thinking back on what could have been; 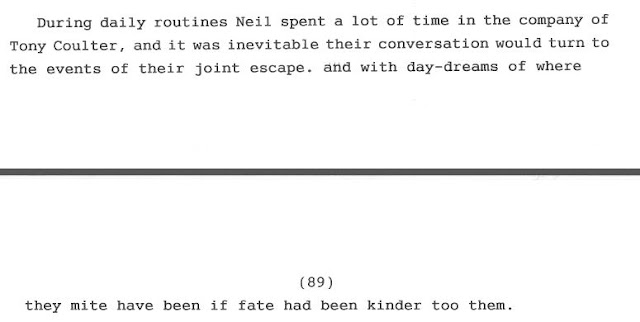 Christmas 1944, although unknown at that time, would sadly be Antony's last. How fitting it must have been for Neil, knowing he was able to share this time with his good friend; 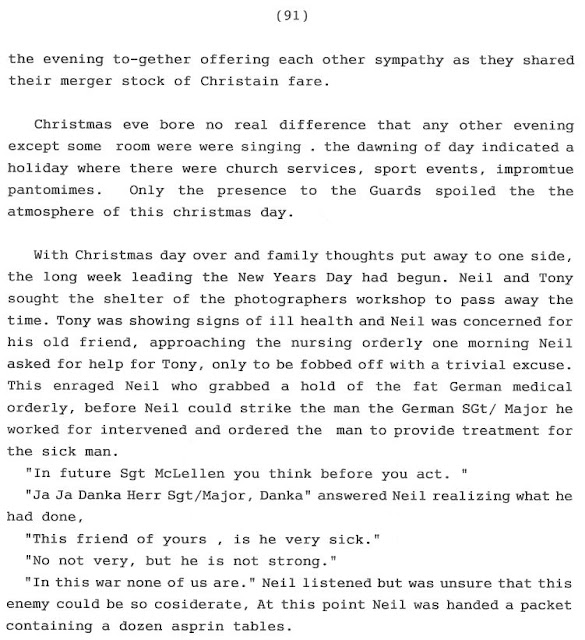 Four weeks later the men within Stalag XXA left the camp, being force marched in sub zero conditions through Poland, into Germany. It was during this march Antony, sadly passed away; 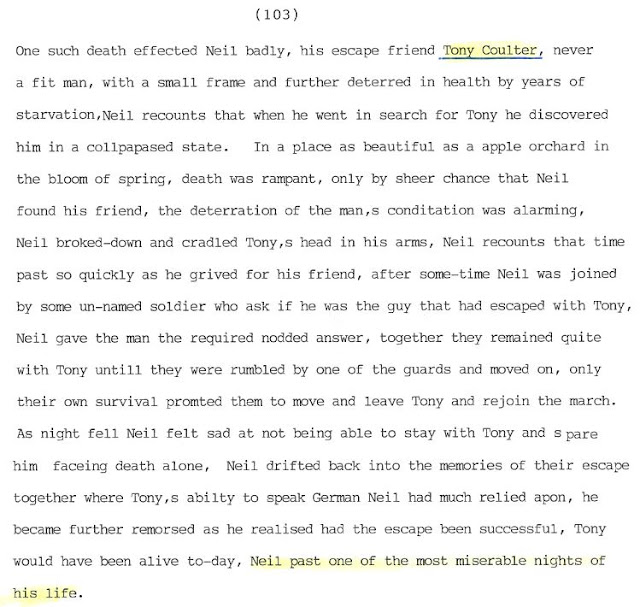 Yesterday I received a message from Antony's Niece, Barbara Willoughby-Thomas. How fitting and symbolic that they have chosen a wreath of Apple Blossoms for his grave.

It is with a heavy heart, though with pride as Neil's Grandson, that I will stand beside Barbara and others from Antony's family, at his final resting place in two weeks time.
Posted by Unknown at 3:23 pm No comments:


Today at 10am, marks the exact moment Neil’s journey as a POW began in St. Valery, France.

General Fortune considered all the options, a counter attack, further resistance, retaking the town but against this there was no possibility of evacuation or support, the men were exhausted and virtually out of ammunition, with no artillery ammunition at all. Shortly before 1000hrs on the 12th June General Fortune took the most difficult of decisions - to surrender.

I remember my Grandad recalling this moment;

“Word started to spread round the Lads, something was happening.”

“Some men were cheering and celebrating shouting it’s over!, It’s over”

Rumours were rife, the men were misinformed and reality soon set in. The Division, had surrendered and they would now be classed as Prisoners of War.

“I couldn’t believe my eyes or ears”, Neil said.

“I looked around and some of the Men were in tears. We just didn’t know what was going to happen to us from now on” 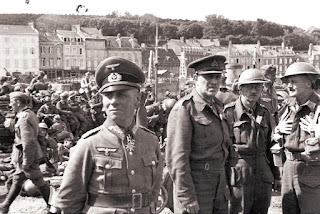 It was with much delight and a touch of emotion, I received the following message this morning;

Sent to me this morning by Barbara Willoughby-Thomas, the niece of Antony Coulthard. What fitting news to receive on this day, 70 years exactly to the day of Antony's passing.

Steve Foster, who's Father Fred Foster, a Sgt. also in the same POW Camp as Antony and Neil, received the email from the MOD, informing him of the decision. Steve worked very hard and submitted a vast amount of evidence and detail to the MOD previously, in hope that they would be able to recognise Antony's final resting place.

A Rededication Ceremony with a full military service, will now be arranged for an appropriate date in July/August.

I am now looking forward to attending this ceremony with some mixed emotions;

To meeting Barbara and Steve for the first time. Three of us, descendants of the three men who were also listed together in official MI9 Documents as persistent escapers.

To know that this great man's final resting place has been recognised and the closure is must bring his family.

To finally know a wish my Grandfather told me, of his friend, is being granted.

The following excerpt from the manuscript of my Grandfathers Book, describes this moment perfectly;

"Forever will the beauty of an Apple Blossom remind him of his friend and the pointless death he suffered. Back in his home town of Rothesay, there is an Apple Tree that stands in the grounds of the towns famous castle, Neil thought of that tree. Even today, forty years on, when that tree or any other tree is in blossom he is reminded of his friend and silently prays in remembrance."

The person recording my Grandfathers thoughts at the time, also stated;

"During my Interviews with Neil, I have never seen him so disturbed and tearful, as he talks about his friend Antony Coulthard"

"Up to this date Neil has never been able to trace any known resting place for his friend Tony. It is his wish that one day, this will be known."

Rest easy Grandad, you're Friend has now been found! 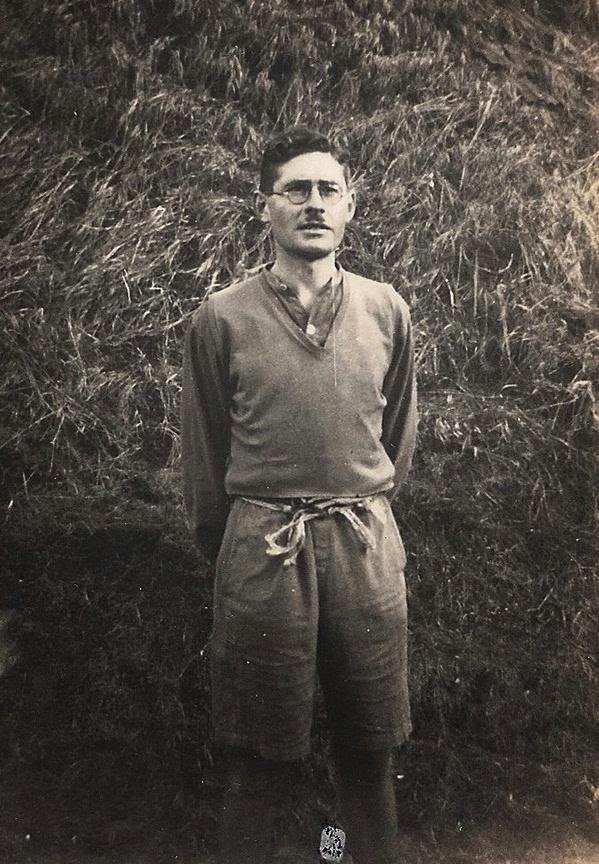 A Burns Night he would never forget, 70 years ago today!

“The 25th Jan 1945, Burns Night, a night many of the Prisoners would never forget.” Words I remember my Grandad saying many years ago, as he told me yet another amazing story of his time during the Second World War. After what seemed like an eternity in a POW Camp, this was the night he had finally waited for, the beginning of his journey back home.
Unfortunately the high spirit of many of the POW’s that night did not last long. This was to be the beginning of a notorious “Long march to freedom” across Poland and into Germany, in freezing temperatures well below zero. This event lead to many deaths, some of which Neil’s closet friends, he met during his time in the camp.


One such friend, Anthony Coulthard, a great friend of Neil’s, accompanied him on that March. Unfortunately Anthony’s condition deteriorated during the March and he didn’t make their final destination. His final resting place was not known following the war and this was something my grandfather always thought about on Armistice Day.
Two years ago, through the power of the internet I managed to trace a relative of Anthony and the son of another fellow POW. It was with much delight that that we were in contact with each other, with the same task in mind.
Months of research and visits to various sites had taken place with one aim in mind. An unmarked grave of a British Soldier, near to the spot where he passed away has been found. It is now hoped that Anthony’s final resting place has been found. Using documented eye witness accounts including information from my Grandad's book, the evidence is strong enough that Ministry of Defence are now looking at the case. A long and arduous process that will hopefully provide his family with closure and a wish my grandfather would have been so happy to have granted.

Epitaph On A Friend - Robert Burns

An honest man here lies at rest,
The friend of man, the friend of truth,
The friend of age, and guide of youth:
Few hearts like his, with virtue warm'd,
Few heads with knowledge so inform'd;
If there's another world, he lives in bliss;
If there is none, he made the best of this.

Amongst the many stories my Grandad used to tell me, there was one that always stood out at this time of year. Two years before Neil was born, in a battlefield far away, a miracle as many believed, was about to happen.

On Christmas Day, word was spreading throughout the British trenches of an organised truce and that all should take part. Not knowing if this was truth or perhaps a hoax, one British soldier took the brave step of lifting his head above the parapet and looked towards the other side. To his astonishment he could see soldiers from both sides walking towards the each other. Exchanging gifts such as chocolates and cigarettes.

Many similar events happened that day, including a notorious game of football between both sides.

Unfortunately the christmas spirit did not last and war soon returned, for the next 4 years.

The events of that day proved that even in the darkest of times, humans can be human. A truly remarkable story and one that will hopefully live on in the memories of others, for the next 100 years.

Merry Christmas to you all! 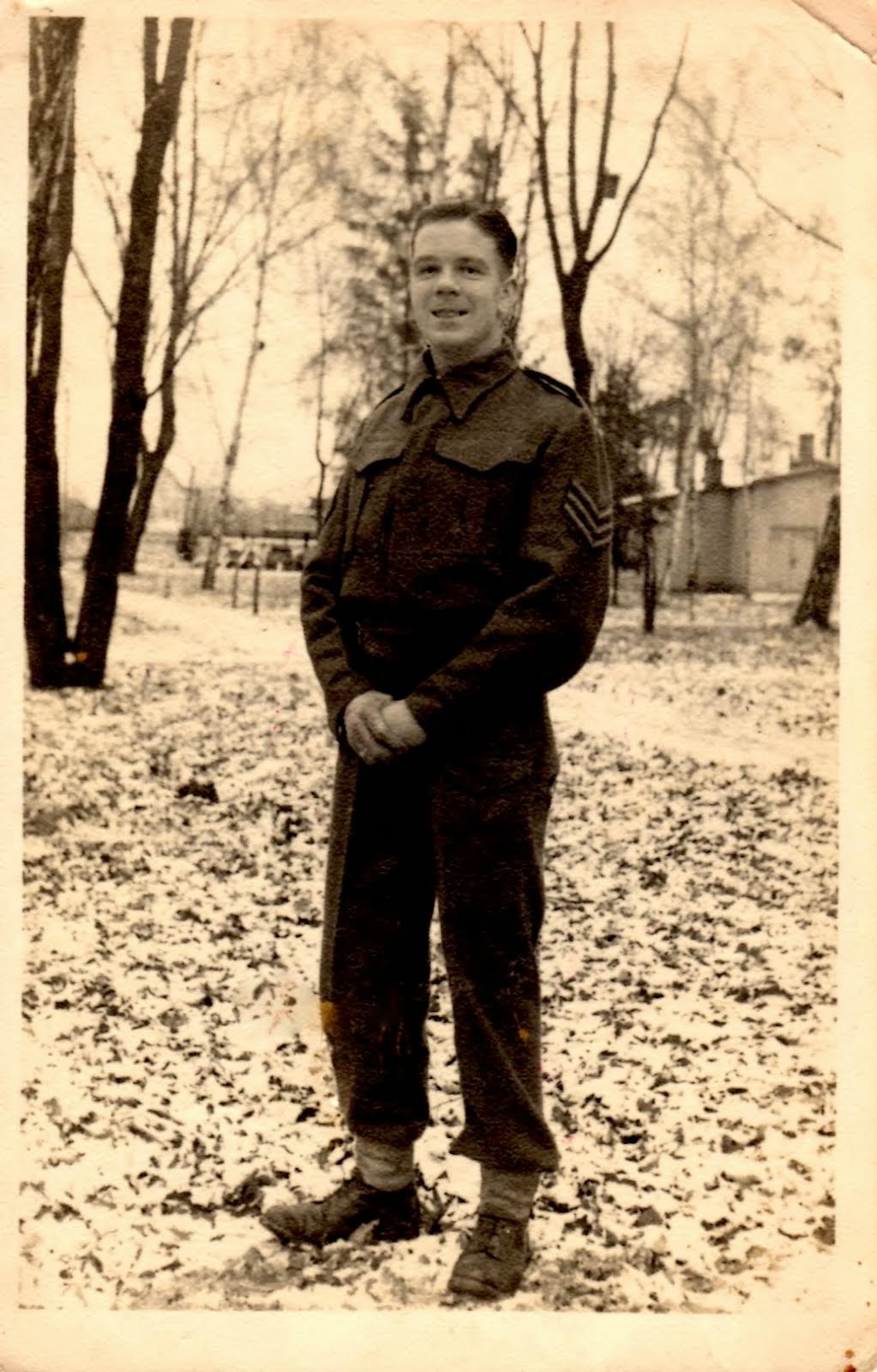